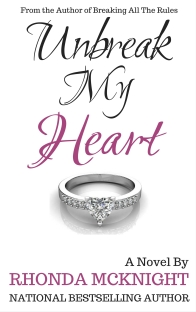 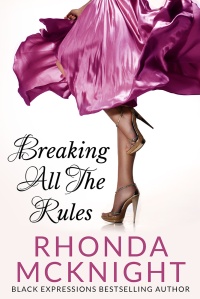 Breaking All The Rules

This was reading satisfaction from beginning to end. ~ Michelle Monkou, USA TODAY

Some rules are made to be broken…

Deniece Malcolm is shocked and heartbroken when she finds out her baby sister, Janette, is marrying Terrance Wright, because she was the one who was supposed to marry him! Everybody knows there’s a rule about dating exes. Janette is pregnant and not only is this wedding happening, but Deniece has to arrange the festivities.

Deniece’s feelings and pride are hurt, but surprisingly, Terrance’s younger, sexier, cousin, Ethan Wright, is there to provide a listening ear and a strong bicep to cry on. Ethan’s interested in Deniece, but she has a rule about dating younger men. Despite her resistance, things heat up between them and Deniece begins to wonder if it’s time to break a few rules of her own.

Cameron Scott’s reality TV show career is spiraling into an abyss. She’s desperate enough to do almost anything to keep a roof over her head and provide the financial support that’s needed for her daughter and ailing grandmother. When her estranged husband, Jacob Gray, reenters her life offering a lifeline she realizes she still loves him. Cameron has kept a painful secret that continues to be at the root of the unspoken words between them. She’s a woman of great faith, but regaining trust requires telling all and healing old wounds that she believes would destroy any chance for happiness they could have.

Jacob Gray believed he’d spend the rest of his life loving his wife, that is until he discovered she was pregnant and there was no way it could be his child. He tried to put Cameron out of his mind and heart, but five years have passed and he still loves her. Jacob risks everything, including his fortune, in hopes of getting a second chance at love. Though he quickly discovers Cameron’s not interested in rekindling what they had years ago.

Will Jacob convince her to forgive the mistakes in their past and allow each other to heal their broken hearts?